The Juxtaposition of Christ and Christianity Part #2

Part #1 of this series, focused on Pure Religion, taking a small and short drive into the money, power and fame alleyway of modern Christianity and how it rarely, if ever, truly reflects the theme and image of Christ. Asking the question, if Christ sent his disciples forward with a message not to create a base camp, not to take money for their work, not to demand titles, positions, power, prestige – why has so much of Christianity become the absolute opposite of its founder?

Today, I want to talk to the walls of division that have been created by the so-called followers of the supreme inclusionist, Jesus Christ. Denominationalism is the creation of the seemingly inherent nature of human, that of proving who is right and who is wrong, who is in and who is out, who is in charge and who will serve that person. We have a sometimes fatal, spider-web obstacle course of church choices, each vying for your patronage. But why?

What makes this conversation a little peppier and fun is knowing that when you use the word inclusion around very different circles of Christianity, the responses will be as varied as there are variations of Christianity. To the more fundamental, conservative, deep-south literalist minded types, it can be seen as nearly blasphemous, and to the more liberally progressive version of Christianity, you will be excluded unless you adopt a more inclusive model (Unitarian/Universalist), making the word almost a dichotomy in and of itself.

So perhaps defining what and who Christ included or excluded should precede the discussion on how the church has juxtaposed Christ on inclusion. That was a mouthful…

What is my idea of Inclusion?

Fundamentals see the word [inclusion] as accepting of sin, and of course, this is primarily focused on the inclusion of LBGTQ community members and the focus of progressive/liberally minded churches allowing of non-heterosexual, non-gender-identified and people not compliant with traditional cultural roles and rules into positions of leadership and church authority.  The image of Christ, however, when it came to inclusion, had nothing to do with that particular topic.

It did, however, break stereotypes of a patriarchal and hierarchal society, one in which women learned in silence, children spoke when they were spoken to, and deviants were dragged into the streets and killed before onlookers to be an example of propriety. Thus, when you see the illustration of the adulteress in John 8, rather than following the traditional practice of sentencing the woman to death, Jesus instead said, ‘Neither do I condemn you.’ (Yes, I know He then said, ‘Go and sin no more.’)

Jesus spoke with the Samaritan women, which would have been seen as blasphemous to the fundamental Judaic culture. He sat with sinners, allowed a woman to touch him, and furthermore, didn’t cast her away but approved of her faith and answered her pleas. He commanded that the little children be brought to him, and he touched dead bodies, healed on the Sabbath and ate without ritual purification. In other words, He broke the rules of inclusion/exclusion. He wasn’t accepting of Sin, but he knew he was going to pay the final penalty for sin, so he broke apart the fences and border walls people had made to protect their fundamental ideas of self-righteousness.

While the war rages on about the afore-imaged topic, there is a great gulf between Christ and the Church based on much more trivial topics.

The reality is, the New Testament church, under the teaching of leadership like the Apostle Paul, taught order, and even Jesus taught the order of dealing with church discipline. This did include when someone would need to be removed from the church body as a whole, but I can promise it was never over clothing, television, etc.

Let me paint a few pictures of how down-right silly the exclusion becomes when fundamentalism goes unchecked and awry in Christianity. Of course, this can apply to many, many religions. In the caste system of the Indian culture (India), if you marry outside of your cast more fundamental/village types would kill the offenders.

In the church I left, now known to be a cult, you were disallowed to watch any television or movies, nor consume worldly music. Women were not allowed to wear pants, nor trim their hair, wear makeup, no one was allowed to wear jewelry, not even wedding rings. And the punishment for doing so was to be corrected and then removed from the fellowship of your local church body if you didn’t turn around.

For instance, there was one young man who was discovered to be watching DVD movies on his gaming console. After some repeated attempts to ‘correct’ this young man, the pastor made him publically confess in a church service, standing up in the middle of the whole congregation to confess his ‘sin’, and then swear that he would never do it again, apologizing for the shame he brought upon the people. (This reminds me of Lucious in the movie The Village – if you have not watched this, it is a MUST) 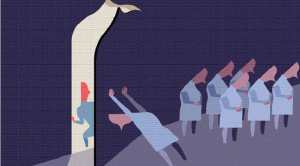 Another sad example is a very talented young lady that used to ride my Sunday School bus who was becoming friends with some of the ‘church’ kids. (To make this story make sense, you have to understand that my old church separated ‘church’ kids, and ‘bus’ kids as being in two different classes of people. Think a caste system.) There was a Youth convention with an Open Mic night to allow young people to sing, have a good time and for the church to find some talent.

This particular young lady could sing and I expected some-day to see her in a professional setting. So, having a love of singing, she signed up for Open Mic night. When the coordinator saw her name they had to inform this young lady that she could not sing in the open mic night. “Why?” she asked, heartbroken. “Because you aren’t a member of our church. You have to be baptized in Jesus name and filled with the Holy Ghost (speak in tongues) in order to participate.”

Needless to say, this young lady, who was on the verge of joining the church, never returned. She was excluded from the simple act of singing because she didn’t meet the church’s criteria of what it takes to be Christian – which felt very unChristian to me.

When it comes to Liturgy and tradition, this isn’t entirely new. For instance, in most Catholic churches you are unable to take part in the Eucharist (communion) unless you are a confessed Catholic and have verbally confessed your sins. In my old church, much like the previous story, you could not participate in Communion unless you were 12 years old and up, been baptized in Jesus name (not the titles) and had received the Holy Ghost with the evidence of speaking in tongues, and no doubt, other denominations have similar traditions of inclusion/exclusion.

I am reminded of the radical (and lunatic) pastor of a fundamental Baptist church Steven Anderson who has become well known for his tirades of anger against homosexuality and other so-called ‘worldliness’. In fact, he is a major outspoken voice in opposition of Oneness which you can see here. He is also known for going on national news and declaring that gay people should be executed by the state, that this was a Biblical mandate.

In his videos, you’ll find him excluding people from the church who simply ask questions. In one video, a young man walks to the front of the church asking for prayer and Steven Anderson pushes him away and tells him ‘Get out of here’ and calls for the ushers to take the young man out. Like my old pastor, he lives by the creed, “You can’t ask questions so long as you accept my answers, and don’t ask questions that are too rebellious.”

Now, obviously, I’m pulling out some extremes here, but it is true in most Christian churches that you are either part of the local group or you are an untrusted stranger, and until you fill out the membership card, fulfill some pre-determined initiation ritual such as baptism, or perform some other works to show your commitment, you are ‘outside’.

Recently, churches across the world have been performing experiments, primarily as the pastor or someone in the church pretending to be a homeless person, dirty, ragged, destitute. They camp out by the church, sleep, beg, and seem helpless. The challenge is to see how well that person is accepted by their congregation.

By way of example, this pastor in Africa, who believes himself to be a prophet was completely rejected by his own church dressed as a homeless man. No one talked to him, offered him help, support, and when he attempted to enter the front of the church the ushers/men of the church tried to drag him away.

In another example, pastor James Macdonald did the same experiment among his churches campuses and was met with mixed results. It seems today, Church and Christian is a neat package, made up with nice clothes, fancy shoes, the right makeup, nice cars – the right ‘look’.

And this is the juxtaposition of Christ and Christianity.

Christianity is so self-absorbed that they cannot be what and who they are meant to be. Recently I was speaking to a group of people and I was asking about churches and the churches they choose to attend. Most commonly, the reason for going to church had little or nothing to do with fulfilling the gospel. The Gospel has never been about making yourself happy, or feeling connected, or having a good worship program or great ladies/men’s nights out, or whatever thing churches do to attract and keep members.

Now, I am not saying those things aren’t GOOD for us as humans and people who need fellowship. But is that really ‘doing’ the Gospel when we would turn our noses up at the people who weren’t baptized right, or held the same pre-tribulation/post-tribulation theology, or who hadn’t attended the orientation class, or didn’t dress right, look right, smell right?

Let love of your fellow believers continue. Do not neglect to extend hospitality to strangers [especially among the family of believers—being friendly, cordial, and gracious, sharing the comforts of your home and doing your part generously], for by this some have entertained angels without knowing it. Remember those who are in prison, as if you were their fellow prisoner, and those who are mistreated, since you also are in the body [and subject to physical suffering]. ~ Hebrews 13:1-3, AMP