The Juxtaposition of Christ and Christianity Part #1

The longer I have been removed from organized religion the starker the contrast between the message of Christianity and the visible church (application) of Christianity has become to me. As I study the history of fundamentalism, evangelicalism and the later rise of the charismatic movement (more on that to come in a later post) this becomes even more poignant. Before the rise of fundamentalism, Christianity was heavily philanthropic, focused on social justice, suffrage, equal rights, and the well being of each neighbor, both foreign and domestic.

Todays Christianity, as it transitioned in the 20th century, swung wide and far to evangelicalism, revivals, awakenings, conservativism, elitism, and charismatic capitalism. We see the apex of this movement today in crystal palaces, the opulent lifestyles of the rich and famous mega-pastors of the world that demand constant and larger offerings from their followers to fund private jets, mansions, lavish lifestyles and more. Yet, it creeps down even to the little country church that never makes it to local, state-wide or national news, staying hidden in rural-suburban America.

The definition of juxtaposition is the fact of two things being seen or placed close together with contrasting effect. One great illustration of this would be to place two images side by side and to let the viewers study and compare the two, to see the irony, contrast or sadness between the two. This image is a little bit of a silly example, but it makes the point.

In fact, one of the most compelling documentaries I’ve watched (as a Christian) dealing with this image of the visible Church was called ‘Lord, save us from your Followers‘, produced by Dan Merchant in 2008. One of the primary themes of the video was coping with the billboard image of the Church, asking people, when you hear the word ‘Christian’, what first comes to mind?

Thus, the Juxtaposition of Christ and Christianity would be to place Christ, and the New Testament Church, side by side, and see what contrast there could be, perhaps what irony and sadness there may be. Remembering that Christ came to break the captive free from captivity, I often look at the temporal church as that captivity, just as the Judaic Law and Pharaiscal ‘church’ system was in the days of Christ because rarely do I see it truly reflect the image of Christ. 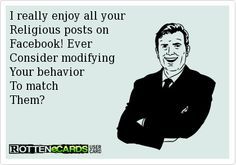 The answers, in the documentary, were mostly negative, using words to describe Christianity such as hateful, judgmental, hypocritical. And if we stand that public perception side by side with the narrative, theme, and message of Christ himself, as written in the Christian Bible, the contrast is obvious. So why? Why does the visible Christian church at large rarely reflect it’s namesake – Christ? Why is the church so divisive when Christ said let all come to me. Why is the church so focused on the walls and barriers of denomination when the veil of the temple was torn so strip away such ideology?

To answer those questions I believe we must first look at some of the contrasts between the message of Christ and the behavior of the church. And of course, it goes without saying, but I shall say it anyway – that not every contrast or behavior applies to every church and every believer. I do believe it applies by majority however and thus, we are all guilty by association. This may seem like a judgment of all Christianity, and every Christian, and in some small way I suppose it is, but it is not a personal attack on every country church, and every preacher and every person attempting to do the best they know to do.

Someone asked me a while back, ‘What kind of church WOULD you be willing to go to?’, This person knows I disavow organized religion at this stage of my faith journey (deconstruction and reconstruction), and I responded, The one with no building, pulpit or pews, that meets just long enough to coordinate which homeless shelter they will feed/serve that day, or which children’s hospital they will visit that day, or which food pantry they will volunteer at.

Pure and unblemished religion [as it is expressed in outward acts] in the sight of our God and Father is this: to visit and look after the fatherless and the widows in their distress, and to keep oneself uncontaminated by the [secular] world. ~ James 1:27, AMP

I know of a very large church, with thousands of members, with a very large building and property, huge sanctuaries, lights, smoke, banners, bands, salaries, positions, and all the trapping of the big Christian church. Events, parties, outreach, community gardens, and the such. And, this church, I admire because it does feed the hungry, and have a food pantry, it does have shelter programs and such like for homelessness. And one day, a delivery truck broke down and cost thousands of dollars to repair. 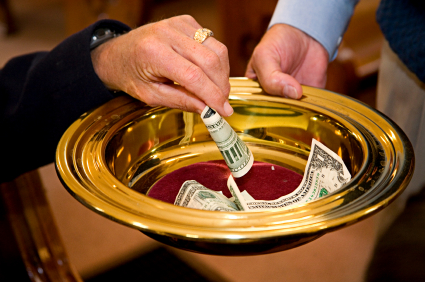 After this event took place, they took to social media to explain how that due to the repair expense the food pantry would go weeks without meat, other supplies would run dry before donations caught up to the expense, and they needed more donations to make up the difference. I was moved, I logged on to their website and set up a healthy monthly donation to the cause because the need to feed people outweighed my need to buy another widget.

And then I thought about it. I wonder why the church itself didn’t pay for it? Did the churches food program need more donations? Being in the industry I am in, managing a sales team of a multi-million dollar organization that installs security systems, audio/video systems, in churches, I know the costs behind those smoke machines, lights, scaffolding, amplifiers, audio switches, etc.

Of course, a system takes money to operate, but I question an operation that spends hundreds of thousands of dollars to make the lights and sound perfect, but a truck repair would leave people going hungry if more community members didn’t step up and give more. Now, I’m not criticizing this church, I would put them on a pedestal compared to the one I left. The one I left demanded 15% of your income, the pastor, his wife and kids all drove BMW’s, they lived in million dollar homes and they had no food banks, no charity, no clothing support, shelter/energy support and condemned anyone who would give to charities before giving to the church.

There is a large Pentecostal church in Little Rock, Arkansas called First Pentecostal Church. My old pastor’s daughter married the son of the pastor of this church, soon to take the helm of the opulent business his father created. Their Instagram presence is all you need to see to determine where the money is spent. Our first Juxtaposition is the message of Christ to His disciples to further the Gospel as compared to the sanctuary of ‘First Pentecostal Church’, which I may say, doesn’t look anything like the ‘First’ church. 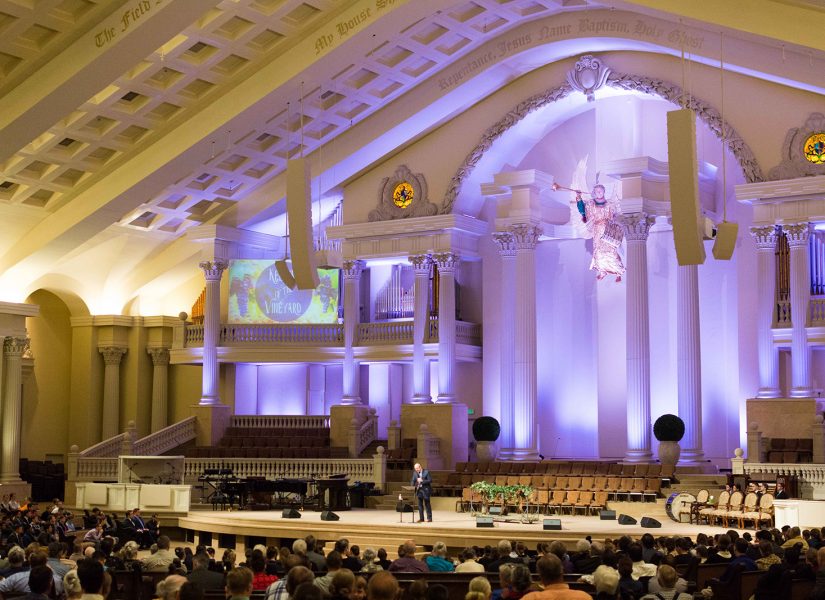 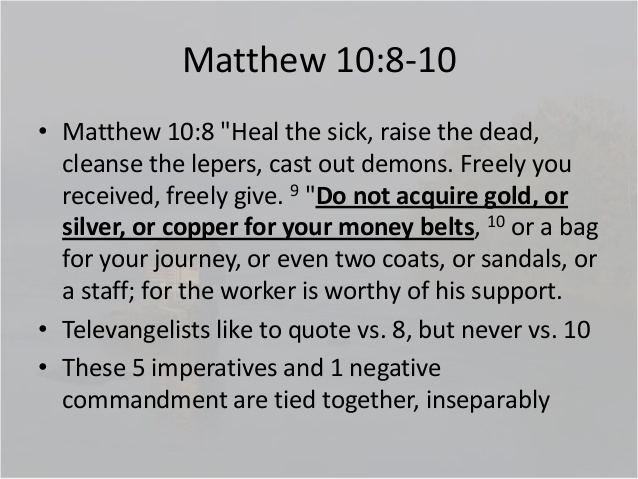 The Catholic church has historically been known as the most philanthropic Christian organization, setting up children’s hospitals, caring for the elderly, foreign aid, and yet it too suffers from the abuse of money for power.

First, we find in Matthew 10 Christ’ commandment to his twelve disciples while sending them into the world, to preaching the Gospel, that it was not a money grab. He [Christ] made it abundantly clear that this mission wasn’t a wealth building operation. Vs 8-9 speaks of giving freely and not filling their purses with gold, or silver or brass as payments for their ‘service’ to God. So then why do so many (I speak primarily or North American ‘church’) make this all about power, prestige, income, and titles of power and authority?

I can’t speak to his story entirely, but I recall the story of Rick Warren, pastor of Saddleback Church, that when he made it big selling his book The Purpose Driven Life, that he paid back 100% of the salary his church paid him and no longer accepts a salary.

And speaking of titles, Matthew 23 is a mirror into the church I left and a reflection of the Church at large. Titled the Seven Woes to the Scribes and Pharisees, this chapter goes on to describe the wealth building, servant creating, title loving ministers of the day that set a stage for modern-day preachers.

These were men that demanded the best seats at public functions, the best foods, to eat first, to be elevated and separate from the ‘normal’ people, to create a workforce of people running about doing things for their benefit. They loved to be called by titles, Apostle, Prophet, Missionary, Evangelist, Pastor, etc. (If you haven’t researched the New Apostolic Reformation, you should.)

And these are not one-off events that perhaps I alone have experienced. I have connected to hundreds and thousands of people from many religious backgrounds, such as Ex-UPC people, ex-JW, ex-Mormon, etc. They nearly all report the same type of behaviors in their churches, spread across the contingent USA and into other countries.

So if Christ’ message was one of humble self-abasement, the refusal of wealth and earthly gain and fame as ‘payment’ for spreading the Gospel through healing, preaching, praying, feeding, sheltering and giving hope, why has the visible church become so extraordinarily opposite to example?

One may, at the end of this article say, “I’m so glad my church isn’t like that.” And I would hope you might take the time to describe how different. Is the pastor taking a salary? Is this gospel, to be freely given, a paycheck? Is nearly all of the money of the church feeding the hungry as Christ did?

There is no doubt that historically, in the time of Christ, attendance to Synagogue was common, and the New Testament church focused on coming together in prayer and in support of one another, but is more emphasis being ‘there’ vs being ‘out there’?

I’m curious what kind of Church you have found that fits the message of Christ and other ways that you see the visible church contrasting Christianity’s purpose. See you in Part #2, Inclusion vs. Exclusion.