At its core, legalism is the belief or doctrines that there are standards, rituals, and performances one must do in order to be accepted by God i.e., Saved. As noted in my previous article, “Forcing the Bible to say what it does not say”, I noted the comments of a person who said, “Grace is only applied (Ephesians 2:8) to an individual after they have performed the ritual seen in Acts 2:38.”

One of the most common questions people have when facing the concept of God and attempting to understand who He is and what His gospel is was asked by the Philippian Jailer in the book of Acts, chapter 16. “What must I do to be saved?”

This question has been asked, answered, asked again, and answered again. Everyone has an answer. But lately, in a group of people who have left legalism we have been asking the question, “Was I saved?”, and further, “Are THEY saved?” Turning to Scripture is the only way to answer that question.

The reality is, Scripture defines salvation over, and over again. Jesus started answering the question by saying things like “But he that endures to the end shall be saved.” (Matthew 24:13) or “Thy faith has saved you, go in peace.” (Luke 7:50) and “I am the door; By me, if any man enter in, he shall be saved.” (John 10:9)

Jesus said several times, “He that believes shall be saved“, but one time added the words, “and is Baptized” (Mark 16:16) to the mix, which seemingly gave denomination after denomination license to create more ‘and is‘ lines to the narrative. Although it is commonly believed in commentaries and by scholars that the ‘and is baptized‘ is not a salvific requirement, as in, ‘unless you are baptized you will be lost’, but that it meant, ‘Anyone who believed would then go on to be baptized.’ 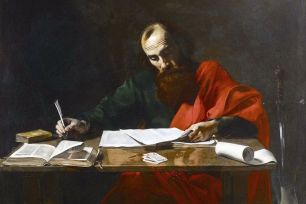 The Apostle Paul spent excessive amounts of time writing about justification and salvation in his epistles, especially early on, indicating how necessary it was for him to clear the muddy waters on this subject then. There is nothing new under the sun!

As we have learned through scholarly study and historical evidence, much of Paul’s writings were completed before the Gospels were written, including the book of Acts. But we see a historical fight shaping up early in the linear reading of the Bible, in the book of Acts chapter 15 about this very topic.

It is here that Paul travels to Jerusalem to the Council of the Elders to report that many New Testament believers were teaching legalism – the need to obey the Law of Moses and circumcision in order to the saved. After the proceedings took place, the council dispatched letters, sent by Apostles (chiefly Paul) and couriers to tell the Christian world that the law did not save them.

Act 15:24  Forasmuch as we have heard, that certain which went out from us have troubled you with words, subverting your souls, saying, Ye must be circumcised, and keep the law: to whom we gave no such commandment:
Act 15:25  It seemed good unto us, being assembled with one accord, to send chosen men unto you with our beloved Barnabas and Paul,
Act 15:26  Men that have hazarded their lives for the name of our Lord Jesus Christ.
Act 15:27  We have sent therefore Judas and Silas, who shall also tell you the same things by mouth.
Act 15:28  For it seemed good to the Holy Ghost, and to us, to lay upon you no greater burden than these necessary things;
Act 15:29  That ye abstain from meats offered to idols, and from blood, and from things strangled, and from fornication: from which if ye keep yourselves, ye shall do well. Fare ye well.

So from the beginning, the answer has been debated, answers and changed and debated again, to answer the question, “What must I do to be saved?”

At its core, legalism is the belief or doctrines that there are standards, rituals, and performances one must do in order to be accepted by God i.e., Saved. As noted in my previous article, “Forcing the Bible to say what it does not say”, I noted the comments of a person who said, “Grace is only applied (Ephesians 2:8) to an individual after they have performed the ritual seen in Acts 2:38.”

Legalism teaches that when Scripture says, “You are saved by Faith”, that this doesn’t actually mean having faith in and trusting in the works of Christ is what it takes to be saved. They would rephrase it into something like this:

There is always this thin veil of truth buried within the folds of every lie. Even Scripture says in James 2:18, “I’ll show you my faith by my works.” Later the writer says, “Faith without works, is dead.” Scripture doesn’t lie, but like when Jesus said, “He that believes on me and is baptized shall be saved“, the legalist uses these Scriptures as a license to modify the simple meaning of the Gospel to prove you must Do, Do and then Do some more, in order to be saved.

What we know IS true, is that no amount of dress standards, behavior control, ritual, ceremony, or pomp, can save you, nor is it required to ‘stay saved.’ I once asked a person who believed you had to have the initial evidence of speaking in tongues in order to be saved, “Am I still saved a month later if I don’t continue speaking in tongues or dress the way your church says I have to?”

The crux of the question of salvation depends on having a mature and balanced understanding of what salvation is. According to Paul, when you trust in Law (standards, traditions, Law of Mose) rather than the finished works of Christ and His Blood, you fall from Grace.

Christ is become of no effect unto you, whosoever of you are justified by the law; ye are fallen from grace. ~ Galatians 5:4, KJV

If it is then Grace that saves you (Ephesians 2:8), and you reject Grace by believing and/or causing others to believe another Gospel, you then fall from Grace, or never attained Grace in the first place. This is a hard truth to grasp, but a balanced understanding of Scripture.

What Paul was saying here is more easily read in a general translation that provides a modern understanding of the simple statement in this verse.

You have been severed from Christ, if you seek to be justified [that is, declared free of the guilt of sin and its penalty, and placed in right standing with God] through the Law; you have fallen from grace [for you have lost your grasp on God’s unmerited favor and blessing].

Furthermore, Paul told us in Romans 5:19 that it was the obedience of Christ that makes us righteous and placed in right standing before God. This is exactly what Paul was saying in Ephesians 2 when he said, “You are saved, by Grace, through Faith, and that not of yourselves…”

There is nothing we can do, aside from placing our complete trust in the works of Christ, to be saved. There are of course things we SHOULD do, in response to our faith, and complete trust in Christ. We should follow the early church tradition of being baptized into the family, and we are to follow the charitable and love filled example of Christ.

But those things do not ‘save’ us – they are our response to being saved. Titus 3:7 says, “That being justified by his grace, we should be made heirs according to the hope of eternal life.”

Paul said again in 2 Corinthians 1:21-22 that it was God, not something we did, that anointed us with his Spirit which is the eternal seal of promise.

“Now it is God who establishes and confirms us [in joint fellowship] with you in Christ, and who has anointed us [empowering us with the gifts of the Spirit]; 22 it is He who has also put His seal on us [that is, He has appropriated us and certified us as His] and has given us the [Holy] Spirit in our hearts as a pledge [like a security deposit to guarantee the fulfillment of His promise of eternal life].“

…is this. If you are trusting in the works of Christ, and are sealed with His Spirit, which He gives you as a gift, which is not something you must beg for, or ‘seek’ after, then you are fulfilled in the requirements of Faith. You are saved!

My legalist friends will hate that sentence because they label the ‘no works to be saved’ doctrine as ‘easy believism’ and reject Scriptural, mature and balanced soteriology. But unfortunately, the hard truth is, if you believe you must do something above and beyond what Christ did, and Paul taught, you are fallen from Grace. If you are fallen from Grace, you are severed from Christ as Scripture says.

If you believe or cause others to believe that there are performances you must make to be initially saved, and equal and additional performances you must continue to make in order to stay saved, you have made Christ of no effect to you. You’ve rejected Christ – and sadly, according to Scripture, are not saved.

The bottom line is truly this – Only Christ can judge, the quick (alive) and the dead (severed from Christ). You, nor I, can say what the end of another is. And as a former, surviving legalist, I know believe that I was NOT saved, because I was not trusting in Jesus. I was trusting in legalism, my denomination. I was trusting in my speaking in tongues, the fact that I was ‘baptized’ in the right formula, that I went to church 3x a week, that I obeyed the dress standards of the pastor.

And, I trusted that if the pastor was pleased with me, so was God. But, Paul again refuted this misdirected mindset of faith, when he said, “Do I now seek to please Man or God?” (Galatians 1:10)

If you perform and live certain ways because your organization says you must, and will remove you for not doing so (dress standard, worship standard, etc), that is not trusting in God, and Faith in Jesus is required to be saved, not works.