Has someone ever said something to you and you thought, “That’s not in the Bible!”

For over a year I have wanted to start a series called Strange Doctrines, using the banner image of Dr. Strange from Marvel Comics, with the face modified to the leader of the organization I was focusing on, with the ingenious tagline (or so I thought…), “Marvel not that I said unto you, Strange Doctrines.” I’ll sample the banner below as I thought it was funny – but eventually abandoned.

My conscious got a hold of me, or perhaps the Spirit, asking me if the purpose of my series, and efforts, were to attack people personally, or to expose false teachings and in doing so, hopefully also expose the weightier matters of the heart, the true teachings of our Saviour and lead towards the love of Christ? The latter has always been my purpose, and thus, I abandoned the initial effort and will now focus on what I call, Vague Dogmas.

What are Vague Dogmas?

Vague dogmas are teachings within faiths that are considered to be incontrovertibly true by their leaders and followers, even though their origins are obscure or unknown. These dogmas evolve over time and become pillars of denominational articles of faith and standards even though they can rarely be traced to Biblical principles or are not historically accurate at all, meaning the practice cannot be traced to early Christian beliefs through Biblical, archeological and historical written evidence. 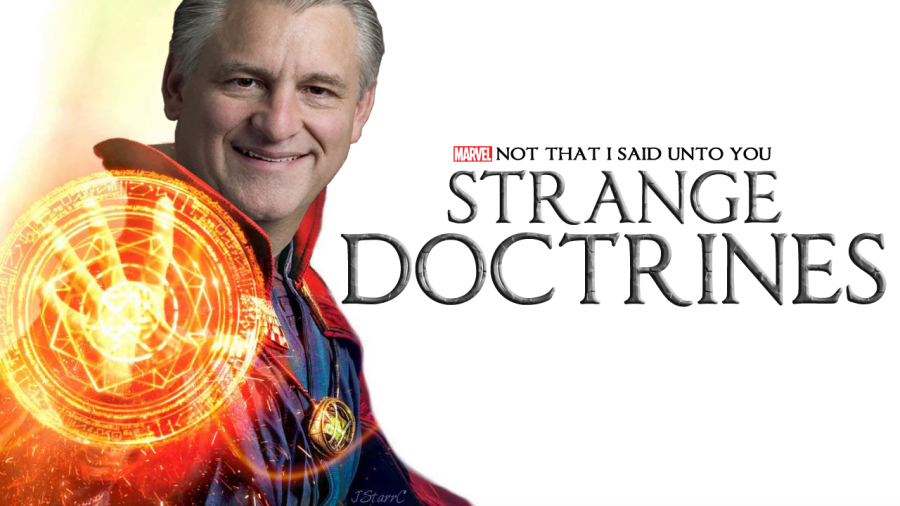 The banner created for the abandoned series, “Strange Doctrines” featuring the face of David K. Bernard, leader of the United Pentecostal Church, International.

The literal definition of dogma is as follows:

A principle or set of principles laid down by an authority as incontrovertibly true. I.e. “the Christian dogma of the Trinity”

What makes vague dogmas so heinous is that they are often taught as salvific requirements to the Christian life, leading followers to believe that if they don’t follow the dogma they will not inherit eternal life or enter into the Kingdom of God.

For instance, in the bonified cult that I left, which was an independent (red flag) Oneness Pentecostal church after the style of the UPCI, they taught that absolute obedience to the ‘man of God’ was required even if his teachings were not found in the Bible. This was supported by them reciting the Scripture of I Samuel 15:23 that says, “Rebellion is as the sin of Witchcraft…”

This, of course, can, and will, and did lead to all kinds of abuse of the Word and people. I asked a parishioner of that church recently, “Do you believe it would be rebellion, and thus a sin to eat red salsa if your pastor said, ‘I feel led by God that for my church, eating red salsa is unholy and not something I want my church doing'”. The answer was yes, it would be a sin to continue eating red salsa.

So this series will look at these types of dogmas within the Christian faith, across different disciplines and denominations to try to determine where the doctrines came friend, what fueled their creation, how the morphed over time, and whether they have any grounding in Scripture and truth.

This is especially dear to me as I grate whenever I hear Sunday School teachers, churches, stories and books tell lies over and over and count it as innocent. We all know Santa Claus isn’t real, the Easter Bunny isn’t real, the Tooth Fairy isn’t real, and neither is the 3 Wise Men or Two of Every Animal entering the Ark. There are so many little lies told about Scripture.

Phantom Scriptures and dogmas hurt the faith – things like ‘God helps those who help themselves’, or ‘Cleanliness is next to Godliness’, or ‘You can’t outgive God’. These so-called truths are abused and only by Biblical illiteracy do they survive. Thus, to borrow the name of one of my favorite YouTube channels, it is time to Unlearn the Lies.

Please follow this series on Vague Dogmas, and we hope you’ll chime in, provide comments and insight, suggestions and even criticism as we delve into long-held Christian beliefs to determine if they are in the Bible, or out of the Bible.