Pastoral Authority: What are the limits?

Does a Pastor have Apostolic Authority? Does he have the right to demand your obedience to his commands, or is the role of a pastor to command obedience to Christ? The real test is this: Is your loyalty to Christ alone, or are you Loyal to Christ through your Pastor?

For a very long time, I have asked myself this question. What are the limits? Is there a limit? Am I rebellious for even asking that question? Is it something that should be talked about? Is the question undermining a pastors role? Muzzling the ox so to speak?

Yet, having come out of an extremely legalistic system that taught, and still teaches, absolute obedience to the pastor, I realize it is something that has to be talked about. You see, a pastor, someone supposedly walking after the Spirit, exercising his position of teaching, leading and feeding the flock of God, should carefully find the balance of exhortation, reproving and rebuking as seen in Scripture without lording his position over the flock of God.

An out of balance pastor, however, is someone who takes his position and uses it in ways that it was never intended for, controlling people in ways not shown in Scripture. I asked a young man a question recently, attempting to show the out-of-balance approach his pastor takes in controlling his flock, and the answer was staggering.

The answer, without hesitation, was Yes. And you have to admire someone so willing to follow their pastor, yet, it’s sad that people can be misled this way, believing the Bible teaches this principle of unequivocal, blind obedience to another flawed human being. Not even Peter or Paul asked for that kind of obedience. They made commands, but Biblical ones supported by the Bible and the Spirit, and they DID have Apostolic Authority, which today’s preachers do NOT have.

So I asked again, “Will God hold the people if his church accountable to that standard now, as if, eating red salsa is a sin (of rebellion) and they will be judged by Almighty God for eating red salsa?”

Again, without hesitation, the answer was Yes.

The result of this abuse of power is that people who do not obey all extra-biblical mandates by the pastor are asked to leave the church, right after being told God will judge them for eternity for not being at that church and submitting to the commands of the pastor.

I listened to a one-hour sermon from John McArthur on Pastoral Authority, and while I’m not a follower of John McArthur, it was a very well rounded explanation of what Pastoral Authority IS, and is NOT. In it, he used a phrase I’ve used myself many times, in explaining the mission of the pastor. John McArthur said, “The preacher has authority if, and only if, he speaks the word of God. His job is to preach the Bible and then get out of the way.”

The Roman Catholic Church, also known as the Western Church, as well as the Eastern Orthodox Church (which split from the Roman Catholic church),  hold the belief that their church fathers, elders, councils, proclamations, and sacraments hold equal authority with Scripture. Indeed, many of them believe that whatever is spoken by the Pope, or the Church proclamations, is direct revelation from God and is thus infallible, and IS the Word of God, and may even supersede the written Word of God that we have today.

They imagine themselves to have another kind of authority which goes beyond scripture. Which is an illusion, if not a blasphemy. – John McArthur

The above red salsa illustration, while silly, highlights this blasphemous idea that the pastor is free to create extra-Biblical standards and doctrines, justified as ‘overseeing his flock’, even when contrary to Bible doctrines. Having personally come out of a very strict, legalistic system (Oneness Pentecostalism) that believes modern-day Pastor’s carry the succession of Apostolic Authority, I can relate to this out-of-balance power grab by pastors who are not true shepherds, in my estimation. 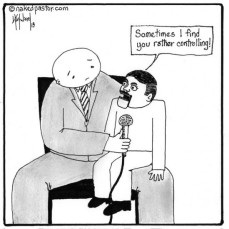 Every legalist and power grabbing individual will turn to Scriptures such as Hebrews 13:17 “Obey them that have the rule over you…”, and interestingly, these groups tend to favor the King James Version of the Bible, because it’s one of a few translations that use the word OBEY and implicates unconditional obedience to a man. (Forgetting not, I hope, that it was written for and at the wishes of a Monarch who held near-absolute power over his subjects).

Let’s compare a few versions of this Scripture before finding it’s true meaning:

“Obey them that have the rule over you, and submit yourselves: for they watch for your souls, as they that must give account, that they may do it with joy, and not with grief: for that is unprofitable for you.” – King James Version

“Remember them that had the rule over you, men that spake unto you the word of God; and considering the issue of their life, imitate their faith.” American Standard Version

“Remember your leaders, men who spoke to you the word of God, and considering the results of their conduct, imitate their faith.” – Word English Bible

Remember your leaders, men who spoke to you the word of God, and considering the results of their conduct, imitate their faith. Remember them which have the rule over you – This clause should be translated, Remember your guides, των ἡγουμενων, who have spoken unto you the doctrine of God. Theodoret’s note on this verse is very judicious: “He intends the saints who were dead, Stephen the first martyr, James the brother of John, and James called the Just. And there were many others who were taken off by the Jewish rage. ‘Consider these, (said he), and, observing their example, imitate their faith.’” This remembrance of the dead saints, with admiration of their virtues, and a desire to imitate them, is, says Dr. Macknight, the only worship which is due to them from the living. – Adam Clarke Commentary

There is no doubt, that the office of a pastor, is an office of leadership. The pastor, as outlined by Paul, is someone who is to be above reproach, careful in conduct, blameless, etc. As outlined in the book The 21 Irrefutable Laws of Leadership, by John C. Maxwell, we know no organization can be better than it’s leadership. Thus, a bad pastor will turn out worse followers, and a great pastor will turn out good followers.

Yet, leadership is one where an example is set and people who value the leadership and example will follow. A dictatorship is a form of control in which those who do not tow the line are punished, publicly. By way of example, my old pastors would make people stand up in front of the whole congregation and apologize for their sins, publicly shaming them, to be an ‘example’. (Sins like watching movies, kissing, all the worst stuff…)

The question is – do modern-day pastors have Apostolic Authority?

Even Jesus said that His authority was not his own, but that it has come from the one who sent him, Almighty God. (John 7)

So Jesus told them, “When you have lifted up the Son of Man, then you will know that I AM, and that I do nothing on my own authority. Instead, I speak only what the Father has taught me. – John 8:28

If even Jesus declared the message that he only taught what he was told to teach, how could any man assume to have the power to preach something he himself has made up?

In the book of Acts, chapter 19, the Apostle Paul is performing extraordinary miracles. He was doing what Apostles were given the power to do, such as a blessed handkerchief was used to heal. Yet, in Acts 19:11 we see the story of the seven sons of Sceva who attempted to do what the Apostles did, and the response was significant.

Seven sons of a Jewish high priest named Sceva were doing this. But the evil spirit told them, “Jesus I know, and I am getting acquainted with Paul, but who are you?”

If the power given to the Apostles was available to anyone who believed and that called on the name of Jesus, then we would still be in mental wards casting out spirits, and in morgues raising the dead, and in cancer, hospitals healing all kinds of sickness.

You see, the authority Jesus gave the disciples was a power that was not to be granted to every leader and pastor after them. If this were so, we would continue in that Apostolic example. By way of illustration, consider the words of Jesus and ask the question “Do we still do these things?”

And these signs shall follow them that believe; In my name shall they cast out devils; they shall speak with new tongues; They shall take up serpents; and if they drink any deadly thing, it shall not hurt them; they shall lay hands on the sick, and they shall recover. – Mark 16:17-18

The conclusion is that we no longer have Apostolic authority, that ended when the line of apostles ended. The authority we now have is the Word of God and what God chooses to do. We no longer (although some try) are bitten by snakes and are left unharmed. We can no longer heal the sick any time we wish, and neither can we cast out devils or have the power to raise the dead. If we did, we would all be doing it every day.

So what is the limit to Pastoral Authority?

The pastor’s authority is simply this; That you preach the Word of God, so that those hearing can understand it, believe it, and obey it. Yet, it is not a pastors place to MAKE someone believe and obey, and to then set up plans of punishment and plans of restoration when people don’t obey you individually.

I find it interesting that my old pastors have looked at my work and told others, “He just wants to be his own pastor.” They can say this, because I deny any Apostolic authority, not just for them, but for even myself. I may teach about Biblical topics, but I have no authority over any reader. I cannot force anyone to take my opinion and obey it.

However, my old pastors can say this because of their perverted idea of what a Pastor is. In their mind, they believe a pastor is to be obeyed as a father over his children, not a man to be admired and followed due to his following Christ. A phrase I’ve used in the past, “Kings don’t like other Kings”, fits when men who grasp for authority, lose it. If you can’t be controlled, you are to be rejected and crushed. This is the way of Monarchial authority.

The limit to any teachers authority ends with the closing of the Bible. If I, or any other, simply teach the words written, not our own ideas, there is an authority, not our own, but the authority of the Word.

Alignment with scriptural teaching, not apostolic succession, is the determining factor of the trueness of a church. What is mentioned in Scripture is the idea that the Word of God was to be the guide that the church was to follow (Acts 20:32). It is Scripture that was to be the infallible measuring stick for teaching and practice (2 Timothy 3:16-17). It is the Scriptures that teachings are to be compared with (Acts 17:10-12). Apostolic authority was passed on through the writings of the apostles, not through apostolic succession.