The Idolatry of Celebrity (Pentecostal) Preachers

Giants Among Us. Larger Than Life. Above Reproach. Super Human. Deserving of the best seating at banquets and church events, the finest food, the best rooms and accommodations. We crave their autograph, two minutes of their time, to sit near them as if, like the Apostle Peter, their shadow might grant us healing, or powers!

The idolatry of celebrity and prosperity preachers is no surprise, but it is rampant among the United Pentecostal Church, International and Pentecostal churches as a whole. But did God want us to idolize preachers, pastors, apostles? Is that the example Jesus came to setup, or Peter, Paul or the other apostles created?

The featured image of this article is from First Pentecostal Church in Little Rock Arkansas, a celebrity church in the Pentecostal world. Their building is worth millions upon millions of dollars, created by all those faithful tithes and offerings they require, and faithful ‘donors’. The hanging angel in their sanctuary (idolatry?) alone would feed many hungry people.

The most notable aspect to a Pentecostal Church is the Celebrity Seating (my term). Every Pentecostal Church tends to do this. They create on-platform, elevated seating for preachers, both local and visiting. This keeps them separated from the little people and puts them in a place of elevated honor.

And then you have the United Pentecostal Church, International., General Conference, which is a once-a-year festival celebrating Pentecost, but most importantly, her preachers.  Anyone who is anyone is here and you gain your UPCI Pride Badge by attending and posting to Instagram. (Sarcasm intended)

This year – to the chagrin of some I’m sure, they decided to embrace the worldliness they shun so rabidly; Hollywood. At General Conference 2017 (hash tag #UPCIGC17) they set up the Hollywood style backdrop and red-carpet photo walk-in for preachers and their kids. This holds great significance because Pentecostalism as a whole shuns the watching of Television and Hollywood created Movies. They consider Television and Movies as the conduit of Satan. And then they do this… 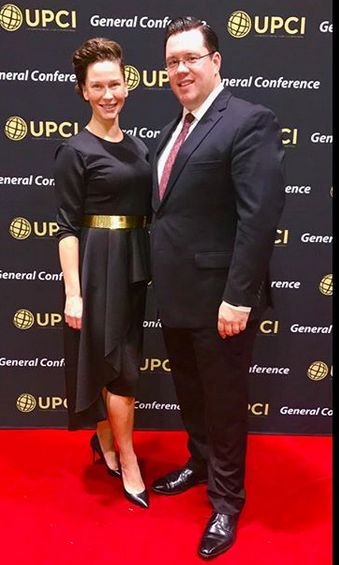 I don’t claim ownership of any images. They are all found on Instagram and are property of their owners. https://www.instagram.com/p/BZoLCyYAWwr/?hl=en&tagged=upcigc17

Want to see it in action? Try this: https://www.youtube.com/watch?v=93n6scICwPc

We, of course have celebrity preachers of all kinds, the Joel Osteen’s of the world, or Benny Hinn, etc. But then we have the small town BMW’s of the world. In my home town, my old preachers and my old church are VERY well known among the community as the BMW Church/Preachers. (The Bishop, his wife, and the Pastor and his wife will only drive BMW’s, and they have special assigned parking street side so all can see)

Every year, at the anniversary Services of Abundant Life Pentecostal Church (my old church) they ship in and pay preachers of all sorts to come and preach. It’s like inviting this years Hollywood special to speak at your event.

Every year, they have special ‘ministers and their families only’ meals at the meeting, but on Saturday they have a whole-church BBQ where the regular people get served the left overs that the preachers didn’t eat at their special meals.

For years this bothered me, and then I was able to read Matthew 23 with an open mind and it all made sense;

They do all their deeds to be seen by men; for they make their [a]phylacteries (tefillin) wide [to make them more conspicuous] and make their [b]tassels long. They love the place of distinction and honor at feasts and the best seats in the synagogues [those on the platform near the scrolls of the Law, facing the congregation], and to be greeted [with respect] in the market places and public forums, and to have people call them Rabbi. – Matthew 23:5-7, AMP

Enter the idolatry of Celebrity Preachers. All they do, they do to be seen of men. They are well-paid performers. They preach a Gospel of Who Knows What, just pay your tithes!. Often, when you listen to a service, Scripture is minimized, or rarely used (a verse at best), and loud, ostentatious noise is instead the focus, shouting and screaming that causes an emotional rift through the people, stirring demonic worship. The louder you can shout, and the more people hopping up and down, the more popular you become.

I feel compelled to point out something very important. It’s a modern revelation, and yet plain for all to see. This is it; When the Word talks about wolves in sheep’s clothing, it was talking about Preachers!

I know that after my departure fierce wolves will come in among you, not sparing the flock; – Acts 20:29

This is the danger of Celebrity Preachers and the idolization of them. They could be wolves in sheep’s clothing. If they are, and you hang on their every word, then like me, you could be led astray by false teachers who have their end goals in mind over your salvation and well being.

Many don’t seem to know it, but their preacher is bigger than Jesus. In my article, Replacing Jesus with your Pastor, we talked about the more legalistic side of this equation, but the todays side, is you!

Let me ask you a question

Does your Pastor teach things that are not found in the Bible, and yet you find yourself following it blindly, without question, even to the point of defending it? Would you be afraid to ask him why he teaches it?

If you can answer yes, you have idolized your pastor. He is a celebrity. He comes in on a red carpet that you condemn, but you excuse it, because it’s your pastor. You can utter the words, ‘If anyone cames against my man of God…why…They will get the five folded ministry!’.

I’ve literally heard men, holding the coveted microphone say this, about Pastor Davies at Abundant Life Pentecostal Church in McMinnville, OR. He’s been convicted of Child Labor Law violations, and paid settlements in a Defamation of Character lawsuit, yet they (his followers) would defend him rabidly.

This is idolization, and it must be exposed. Our God condemned idolatry, but more importantly, he condemned his servants being held in such high regard. Consider the rest of Matthew 23, Jesus’ instructions to His disciples.

But do not be called Rabbi (Teacher); for One is your Teacher, and you are all [equally] brothers. 9 Do not call anyone on earth [who guides you spiritually] your father; for One is your Father, He who is in heaven. 10 Do not let yourselves be called leaders or teachers(Rabbi); for One is your Leader (Teacher), the Christ. 11 But the greatest among you will be your servant. – Matthew 23:8-11, AMP

Certainly, someone who gives their life for the work of Jesus is, as Scripture declares, worthy of double honor. (I Timothy 5:17) Yet, in the regards of worthy of ‘double honor’, this was because those men were spending their wealth performing the work of God’. Not becoming wealthy on the Work of God.

*It would be worth studying the commentaries on I Timothy 5:17

Recently, I visited a church where the pastor sat down with all the ‘normal’ people, and when he was called up, he came up, gave his message, and returned to the people. I was blown away, but then I realized, this was a man of the people, not a man of his Position.