NextAre we putting Christ in the Back Room?
Bible StudyCultlegalism

Scribes and Pharisees in Pastors Clothing

The further and further I remove myself from my religious origins the clearer the Word becomes to me. For one with a 3-year degree from Texas Bible College, I humbly realize how little I knew and know of the Word’s real meaning. I’m wise in the dogmas and ambles of the Pentecostal religion but found wanting in the Faith of Jesus Christ.

Yet one thing has become utterly clear; the religious leaders teaching the things I once believed are the wolves in sheep’s clothing Jesus warned about, and the Scribes and Pharisees He told us not to become. So where does that leave me?

With the healthy realization that religion is dead and it needs to remain dead. A realization that the just (justified) shall live by Faith (Habakkuk 2:4) and that our Faith in Christ determines our outcome in Christ. Not man, nor man’s traditions.

Then touched he their eyes, saying, According to your faith be it unto you. – Matthew 9:29, KJV

Yet, it is man’s traditions that break the bridge to Calvary and results in a crisis of faith, leaving saints of the loving God plummetting to spiritual death or clinging to the shattering edges, barely able to hold on to the last vestiges of their trust in God. When forced obedience to man becomes tantamount to our trust in God, we will surely fail Him as sure as a man will fail us.

Admittedly, my experience in a breakaway independent Oneness Pentecostal cult is not indicative of all denominations, but those who relate to this writing will see characteristics in their own legalism. Man becomes superior to God, and God, as I wrote in the article Are We Putting Jesus in the Back Room, takes the second stage.

In the 15 years I was in a Pentecostal church, and my wife, who is 32 years old and raised in the church from the day she was born, had never laid eyes upon the church Bylaws. That is, until eight months after I left the church and became aware that they existed. In them, I found the Scribes and Pharisees in Pastors Clothing.

Much of the content was mirrored from the United Pentecostal Church, International., for which you can find their exhaustive bylaws here. In the end, it’s a replacement for Christ by the will of the Pastor. He alone administers faith and decides your outcome in Christ. He determines your membership in the Church (which should be eklessia but it really is his [pastor] mini-kingdom).

What are some of these traditions we found in the Bylaws of our Pentecostal church?

How do you spot a wolf in sheep’s clothing? Difficult at first, but easy in hindsight, and that’s why it is so effective! 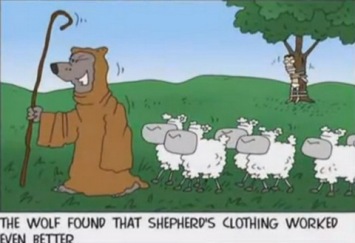 Pondering Thought: There wasn’t a single ‘pastor’ in the New Testament. Not one of the church disciples and leaders were called the pastor, or leader, etc. Jesus condemned this in Matthew 23.

Consider Paul, who was the definitive leader of the New Testament. Not one time did he demand money, income and take for himself, and then shroud his income. Yet, look at this line from my Pentecostal church.

The smoking gun here is this; The salary, wages, and benefits of the Pastor shall be set by the Board of Directors and in respect to the Pastor and his family, the terms of such compensation shall be kept confidential.

Secrets. Wolves in Sheep’s clothing, which we identify with as modern day pastors have secrets. Now I’m not saying all Pastors are this way, I’m talking about those that require extrabiblical demands on the congregation and then horde and make secret their benefit for doing so.

Let’s expose these false shepherds and uphold shepherds of real truth, those who connect a soul with Christ and step out of the way. The men and women of faith who are real before others and make no demands of obedience, simply shine as Christ has given the ability.

We must seek Him first, not a man and man’s traditions!

But seek ye first the kingdom of God, and his righteousness; and all these things shall be added unto you. – Matthew 6:33, KJV