The Village Idiot (Long Read, but a good read!)

I was inspired to write this article after a friend insisted I watch the movie The Village, and I finally did, many months after the suggestion. The Village is a seemingly utopian mid-1800’s community where ‘fear of the outside’ is what keeps everyone in. Until the Village Idiot gets curious and the truth is eventually revealed. #Icanrelate

He is that person who starts thinking (literally), outside the box. Starts using that infamous word, why with a question mark at the end. Begins peaking around the corners and is curious about those things we do not speak of. Wonders why we cannot go outside of the village, only to discover, the great ‘monsters’ of the outside are a creation of the leaders, inside. Cult.

If you haven’t watched the movie, know there are some spoilers here, but I’ll be vague enough to cover what has inspired me without derailing the experience for you. This is a must watch movie and you can find it here: https://play.google.com/store/movies/details/The_Village?id=j5xS0Xlu3zs

We’ve heard the saying, ‘It takes a village to raise a child’, but this movie makes you realize, it takes a village to fool a child. And as an ex-Pentecostal, I can tell you, I was in a Village, and now, I’m the Village Idiot. The fact that I watched the movie proves this, as Pentecostals (at least my flavor) view any production film anti-Christ and those who watch them may as well have been watching pornography.

The village is set inside a large Wildlife refuge area with borders drawn by the village elders, and the belief is firmly created in the populace that monsters reside in the woods outside the fields of the village. Any and all who venture into the woods will be consumed by the evil ones, referred to as ‘those we do not speak of.

And like all cults, they have stories of what happens to those who do venture out. Villagers who venture near the edge will hear the sounds of monsters, snapping twigs and branches, footsteps, and the occasional spotting of a red-robed one. And as with all hard-core restrictive structures, a unquenchable curiosity of what is on the other side is created.

It is not until after the Village Elder’s daughter dies of an unknown sickness that the Village Idiot Lucious Hunt begins asking permission (featured image of this post) to travel beyond the woods, into the Towns to seek medicines that would save the lives of villagers.

Watching the movie on the surface would make you think the Village Idiot was Noah, a mentally disabled man who laughs hysterically at the oddest times and becomes an intrinsic player in the film later. It becomes clear, however, that Lucious is the real Village Idiot, the one asking why.

Strange things begin to happen after Lucious Hunt requests (and is denied) permission to leave the village. As a side note, in my Pentecostal experience, you have to ask the village leader for permission if you can date, who you can date, marry, if you can move, etc, which is why this movie is so applicable to me and why I was told to watch it.

This leads Lucious into a determination that he must explore outside of the village, and at one time, he does and goes about 50 meters out of the village into the woods. It is there he is seen by one of the ‘others they do not speak of’ in which he turns back, but not after

The Red robed ‘ones we do not speak of’ eventually invade the village (in actuality, it was a single red-robed monster…) sending everyone into a frantic panic and hiding, all after skinned animals begin appearing in the village, sending shockwaves through the villagers.

In a city council meeting, Lucious reveals his sin, feeling as if his venture into the woods is what caused the red-robed monsters to become angry with the villagers and invade. Later, Lucious admits his love for the blinded Ivy and askes her, Aren’t you mad that there are medicines outside our village that could have given you sight, or allowed Noah to be calmed and be able to study?

After announcing Lucious’ and Ivy Walker’s intent to Marry, Noah is inflamed with jealousy and stabs Lucious several times, leaving him on the brink of death. It is then, and only then, that the chief village elder, Ivy Walker’s father agrees to let her leave the village to seek antibiotics that will save Lucious’s life.

But in order to do so, she needs to know the truth. The truth is, the village elders are the monsters. They created the lies and fear that kept people enslaved to the village. In their attempt to live a life of innocence in the era of the 1800’s, without electricity, machinations, guns, violence, etc, they had to use fear to ensure people stayed in the village. They created monster outfits, and sound machines, and were themselves the ones who slaughtered animals and become the ‘ones we do not speak of’ to cast fear upon the villagers.

After Ivy learns the truth, her love for Lucious drives her onwards into the wilds beyond the village. And, even after knowing the truth, her fear of the outside still nearly cripples her strength but she perseveres. 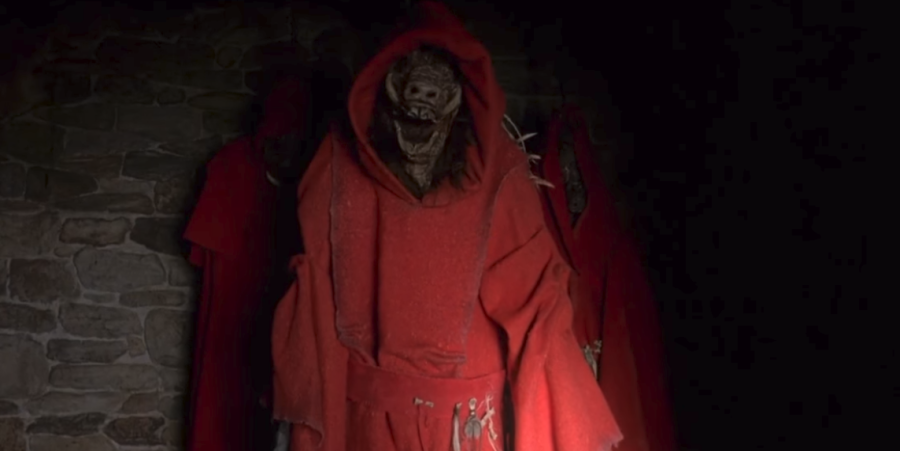 After finding her way to the edge of the village, Ivy is faced with a solid wall that she eventually climbs over and is then confronted by a patrol guard who she convinces to provide her the medicine she needs to save Lucious’ life.

It is at this point we learn the truth behind the creation of the village, enclosed inside the Walker (Ivy’s father is Mr. Walker) Wildlife Refuge, which has no public admittance and is a no-fly zone to ensure villagers never see planes overhead. The rest I’ll leave for you to discover.

So What’s the Point?

I left a cult, that I will now admit. A cult built upon fear. It was a village, just as the one found in Walker Wildlife Refuge. Your entire social circle is found inside the village. Connection to the outside is forbidden. What you see, read, know and experience is strongly controlled by the village elder.

When Ivy Walker is discovered by the patrolling guard of Walker Wildlife Refuge, Kevin Lupinski, she gives him the paper describing the medicines needed and she begs him to help her. After the guard, who is a young man, discovers she lives in the woods he thought was a wildlife reserve (which he has never seen the inside of), he offers to help her, and Ivy utters the words every ex-Pentecostal (or cultist) could share after leaving The Village.

“You have kindness in your voice. I did not expect that.”

Like the red-robed monsters of the woods, cultists are taught the victim mentality that all things outside are not but wicked monsters whose sole purpose is to devour any foolish enough to wander outside the protection of the village and the leader of the village.

All the village elders do is to protect those in the village, but it isn’t until the truth is revealed to Ivy that watchers (you) learn the elders are those who suffered great loss in life, and in grieving counseling, they meet and devise a plan to live in the ‘good ole days’. There, they create a living system that those born into know nothing else and are the gullible victims of those who quite literally pull the wool over their eyes.

Their incessant desire to seek and live in innocence turns them into the monsters of the woods. They themselves lie and propagate the lie to ensure the continuation of their utopian dream. When faced with the death of a villager, they would let him die in order to ensure the truth is never exposed. In the world of cultology (the study of Cults), this is labeled as The Ends Justify the Means.

The Village is a cult hit, quite literally and is a cinematographic masterpiece in acting, soundtrack, and story. The fear is quite real and I found myself gripping my seat with the intensity of the moment. Reviewers have completely missed the real meaning of the movie and call it a drama, or a romance, but it is so much more than that. To an ex-cultist, it is a mirror and a revealing light all at the same time.

This is a must watch.