NextAre you wearing the yoke of Christ, or of Man?
Bible StudySimple Thoughts

Fight for Faith – because it is worth it! The simplicity of the Gospel is that Christ, while you and I were yet sinners, died for us. He came in the weakness of flesh to end the battle of the Law for Righteousness (legalism). He took the penalties for our failures and opened the windows of Grace to a people not worthy of His Mercy.

Don’t believe it? Look to the woman of John chapter 8. The ancient Jewish (law) tradition was that a woman caught in adultery was to be stoned – to death. A harsh penalty and the Jews looked to trap the Messiah going against the law, yet in one moment in time, He [Jesus] ended the fight between Law and Grace.

“So when they continued asking him, he lifted up himself, and said unto them, He that is without sin among you, let him first cast a stone at her.” – John 8:7

I have fought a good fight – Paul

This fight is a continuous struggle – for certain trials of life will come to question it. Our enemy will come to attack it – and sometimes we will push ourselves into a place of self-doubt. Yet Paul in II Timothy 4:7 declared his victory  – that he fought until the end of his days. That is Faith Worth Fighting For!

The Word says that without faith, there is no way that you will be able to please God. Hebrews 11:6. The legalist declares that this means unless you do as they command, God will be dissatisfied with you. Yet the true meaning is and should be taught as this: that faith in full blossom will cause you to please God by self-born desire and in full thankfulness for His mercy!

Consider the power of Romans 10:4;

For Christ is the end of the law for righteousness to every one that believeth.

Christ literally came and removed the requirement to live by the law that declared the adulteress woman worthy of immediate death. He came to create a Faith of grace and mercy to them that believe. In other words, he came to pay the price for all living and future souls, to settle the death into eternity that would be due for sin.

“For with the heart man believeth unto righteousness; and with the mouth confession is made unto salvation.” – Romans 10:10, KJV

Your fight isn’t about how to find a way to gain His forgiveness or to follow enough steps, methods, and laws to pay off a penalty of sin as if paying back your debt.

Your fight is continuing in the promises of God through His eternal mercy, in such a way as to show others, such as the adulterous woman, that the penalty for their sins was already paid! This is letting your little light shine! By allowing the fruits of His Spirit to work IN you, OUTWARDLY so that others may see it. Not in legalistic rituals or practices, but abounding in grace, love, and charity! 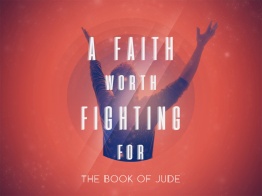 Let your faith be made strong in Him – so that like so many who have come before us and who are now a great cloud of witnesses, you can cheer on others to reach their potential. Together then, we can walk the streets of gold in Praise to the savior who came and gave us a Faith Worth Fighting For!