Have you ever heard of the secret under clothing worn by Mormons and was curious what it was? Is it really Holy Magic Underwear? Where did the idea come from, and do they still practice it? We answer all of those questions here!

In this article in the series of Vague Dogmas, we are taking a brief look at a belief within the Church of Jesus Christ of Latter Day Saints (Mormons) that claim supernatural protection and power comes when a follower of the LDS church wears what they call the Temple Garment. The term Magic Underwear is a derogatory term used by non-LDS followers and we are using it here to follow our theme of Holy Magic dogmas.

According to the LDS church history, documentation and leadership, the Temple Garment is an article of clothing worn both day and night to be a constant reminder to the adherent of their commitment to the faith/church, and they also believe it provides protection to the individual, when worn properly, from evil and temptation in the world. So where did this idea begin?

One of the uses for the Temple Garment (Magic Underwear) is to serve as an ‘outward expression of an inward commitment’. This rings a bell to me having been in the Holiness Apostolic (Pentecostal) movement for 15 years where the extreme dress standards were known as ‘outward expressions of inward faith’.

In Mormonism, (which I hear they don’t want to be called Mormons anymore) each adherent goes through the Endowment Ceremony which is a ritual taken place in their temples where adherents make full commitments to the faith, where they learn certain passphrases and secret sign language codes for the afterlife, and even do a test at the end to make sure they got them right. (I know, just go read it… When they pass angels on the way to heaven they have to use these signs, another proof that you can’t go to heaven if you aren’t Mormon…)

It is at this Endowment Ceremony where the follower is … endowed with their temple garments which is sacred to their religious beliefs, much like a nuns smock, the Jew’s prayer shawl, or the Muslims skull cap.

In a recent propaganda video released by the Church of Jesus Christ of Latter Day Saints, they claimed it was offensive to call these temple garments ‘Magic Underwear’, and said ‘They do not provide any type of supernatural protection to the wearer’. Yet in the Mormon Handbook, it says that the temple garments provide it’s wearers “…protection from temptation and evil.”

So where did this come from, the idea that wearing particular articles of underclothing (or any clothing) was somehow necessary to a religion, or seen as more holy. It isn’t only Mormonism that has some of these dogmas but noteworthy.

For instance, in the Holiness church, I left, which was an independent Oneness (Holiness) Jesus Only Pentecostal church, the leaders taught what types of underwear our daughters could wear, and at what ages. For instance, they taught that during certain ages only solid color panties were allowed, no patterns, and certainly no lace.

We even had a girl in the church school sent home due to being found out that she was wearing ‘forbidden’ underwear, so Mormonism doesn’t have the corner on these strange ideas.

Another example is a video clip of famed Pentecostal preacher Nathaniel Haney teaching on Men Wearing Bikini Underwear and how queer that makes you, and further in teaching out how he inspects his son’s shirts to make sure they aren’t homosexual.

According to known sources, such a Wikipedia, the Mormon Handbook, etc, this originated circa 1840 with the first known mention of the garment and it was a one piece plain cloth garment that the then leadership of the Church Joseph Smith claimed the design to be given to him “By God” and that any modification of the garment was a “grievous sin”. 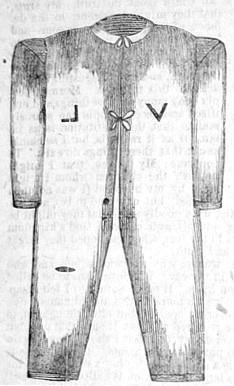 According to their Handbook and doctrines, the sacred markings had significance:

According to a description by LDS Church president John Taylor in 1883, the “Square” represents “the justice and fairness of our Heavenly Father, that we will receive all the good that is coming to us or all that we earn, on a square deal”, and the “Compasses” represents “the North Star”. In addition to the Square and Compasses, Taylor described the other symbols as follows: the collar represented the idea that the Lord’s “yoke is easy and [his] burden is light”, or the “Crown of the Priesthood”; the double-knotted strings represented “the Trinity” and “the marriage covenant”; the navel mark represents “strength in the navel and marrow in the bones”; and the knee mark represents “that every knee shall bow and every tongue confess that Jesus is the Christ”.

As a jovial side note, LDS members enlisted in the armed forces can get camo version of the garments. In the 1930’s, LDS created the organization/company Beehive Clothing Mills to create these garments whereas before they were created by members at home. According to the Mormon Handbook, members may no longer make their own garments.

Although Joseph Smith originally said that it was a ‘grievous sin’ to modify these garments, later leadership and Apostles have modified the designs and materials of these garments. These were one-piece union style suits originally but later were modified to be two-piece sets.

What is more interesting about the origins of the Temple Garment, is that there is really no shred of Biblical evidence to support it, simply visionary mentions of self-proclaimed ‘From God’ statements. For instance, George A. Smith, cousin to founder Joseph Smith declared that Jesus appeared to them at the Kirtland Temple, recounted as such:

“On the first day of the dedication, President Fredrick G. Williams, one of the Council of the Prophet, and who occupied the upper pulpit, bore testimony that the Savior, dressed in his vesture without seam, came into the stand and accepted of the dedication of the house, that he saw him, and gave a description of his clothing and all things pertaining to it.”

One last side note – if you review the known documentation about the Endowment Ceremony you’ll find many similarities with the secret society of Free Masonry.

According to the Mormon handbook, the temple garments serve multiple purposes but most importantly to serve as a reminder of their covenant obligations, a personal reminder of their faith, much like the Cross may be to nominal Christians.

The LDS church adheres very strictly to Old Testmanent styles of leadership/church government, taking titles such as Apostle, Prophets, Priests. This is important to understand to make sense of their ‘covenant obligations’.

While mainstream Christianity believes in the era of Grace as taught by the Apostle Paul, Mormonism is an amalgamation of the Old Testament (Covenant) and New Testament principles. However, they replace the majority of New Testament teachings with their own writings, purportedly revealed to Joseph Smith by the angel Moroni, known as the Book of Mormon. (Holy Magic Tablets?)

There are other purposes of the clothing, as a sign of ritual purity, and according to the handbook they are to provide protection from temptation and evil.

“Church members who have been clothed with the garment in a temple have taken upon themselves a covenant obligation to wear it according to the instructions given in the endowment. The garment provides a constant reminder of the covenants made in a temple. When properly worn, it provides protection against temptation and evil. Wearing the garment is also an outward expression of an inward commitment to follow the Savior.”

When Worn Properly is emphasized because the handbook describes the method of disposing of old or worn out garments, saying that the sacred markings must be removed, completely destroyed, and then the garments are to be cut up so as not to be identified. The significance is in the verbiage: “Once the marks are removed, the fabric is not considered sacred”.

The handbook also condemns showing the garments to non-Mormons or having then displayed in public places. The garment is not to touch the floor or be dirty. Thus, they place sacred, divine reverence to these articles of clothing, again lending to the derogatory term of Holy Magic Underwear.

This idea is supported by Mormons in folklore and modern tails claiming divine protection due to the wearing of these garments. Stories of miraculous healings, being saved from car wrecks, violence, military members claiming divine protection during combat, etc. Propaganda videos released by the LDS church claim ‘We do not think temple garments provide any type of magical protection” but this is in direct contradiction to their published handbook.

While this article was not to disparage the Mormon (LDS) faith or the things they hold sacred, it has become clear that the ideas surrounding the Temple Garments are extremely vague, fairly superstitious and not grounded in any physical Biblical evidence. When viewed in the context of Christianity, there is no Scriptural support for this belief, making it a tradition of men. Furthermore, much like the dress standards of other faiths such as the Holiness-Pentecostal movement, they place over-emphasis, and sometimes salvific requirements on clothing. 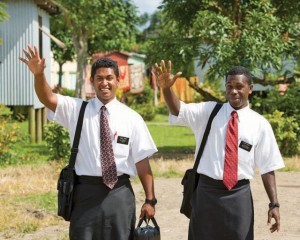 The Mormon Handbook declares that these garments should be worn at all times and only removed for very specific purposes and then immediately put back on, even when lounging in the privacy of one’s home;

“Endowed members should wear the temple garment both day and night. They should not remove it, either entirely or partially, to work in the yard or for other activities that can reasonably be done with the garment worn properly beneath the clothing.”

Another interesting note is that to become a Mormon missionary, one must complete the Endowment Ceremony and wear these garments.

Further, recognizing the controversial acts that are found within the Endowment Ceremony practiced by the LDS Church which is eerily similar and takes direct queues from Freemasonry, indicating, that like other earlier colonial Americans and other church founders, they had direct ties to that secret society and adopted into their new religion many ritual ideas.

As noted in the article linked above, Joseph Smith and other LDS leaders founded a  Masonic lodge in 1842, which dates after the founding of Mormonism and it was directly after this that he introduced the Endowment Ceremony, creating a direct link to the source.

So for all of those out there looking for information on Holy Magic Underwear, here it is! As with all of our articles, we look forward to your feedback and hearing what you have to add to this article.