Coping with the Cults – Part #2 – Judgementalism

Since leaving a cult, I have delved into studying, writing, reading, talking and coping with the very real, sometimes hidden, but obvious affects cults and their teachings have on lives. Most certainly the very word ‘cult’ conjures up the worst horrors to hit the news headlines, like Jamestown, or Waco, TX, but the majority of cults are far less obvious and insidiously covert, and right next door.

The most common fear or result we have seen as a result of leaving a cult is the harsh judgmentalism that is felt by those who leave, or ‘change’. You don’t obey their dress standards anymore. You can feel the whispers, the stares. You can even see it in their children’s eyes.

In Part 1 we dealt with coping with rejection and separation from all you’ve known and been connected to, in the cult. One of the most glaring and obvious signs of a cult is that they require your entire social circle to revolve around them. Your friends, your family, sometimes your job.

Fellowship with ‘outsiders‘ is forbidden. Friendship with the ‘world‘ they say, is enmity with God. This is Scriptural, but their definition of ‘the world‘, is twisted and perverted. To them, that is everyone who doesn’t believe and perform in their predefined mold.

To the JW and Mormon structures, absolute avoidance of non-members is required. To my ex-Oneness Pentecostal cult, you can wave and be nice to the family member that has left the ‘way’, but you should avoid them as much as possible. To the Scientologist, destroying the reputation and value of those who have left, and hate for them is nearly required.

So the end result of this mentality is judgmentalism. Judgmentalism exists by believing that there is a superior, or only way, believing that you alone have that only way and thus have found perfection. Anyone who rejects your way, or doesn’t line up is sub-par. They are rejected by God due to these performance standards, and thus, can/should be rejected by you.

Follow peace with all men, and holiness, without which no man shall see the Lord: – Hebrews 12:14, KJV

They have defined all these things as ‘Holiness’, and then use Hebrews 12:14 (wrongly) to enforce the idea. Why am I saying this?

Because with this mentality, you can now judge those who do not follow this lifestyle choice. For instance, I know a woman who is still in this church standard, and she saw another woman on the side of the road who had left the ‘way’, in pants.

This woman said, ‘Well look, you can see she obviously isn’t going to make it…she is in pants after all’.

A judgment about her status was based on her outward appearance, which, in this case, alluded to her spiritual well-being, as in, she (the women wearing pants) was lost.

Another example of spiteful judgmentalism is how they ignore those who have left their circles. For instance, the bishop of the church I once attended pulled up in a truck to a driveway I stood in with another local businessman, ignored me completely, refused to acknowledge my wave and greeting. He spoke to the other businessman, then drove away without looking at me.

Recently, the pastor of the church sent a Christmas card to my home and wrote the label to specifically exclude me from their holiday wishes. They could have labeled the envelope, ‘Brickley Family‘, but instead they singled out my wife and daughter.

They and their followers will say, ‘You are the one who chose to leave’. Yet, I’m not sure how you can justify dropping respect and decency for another person simply because they disagree with you, and/or choose not to attend weekly services at your building.

Another young man decided to leave the church and this same pastor told him spitefully, ‘We will compare how our kids turn out in 30 years to decide who is right and who is wrong.’

This is why judgmentalism is a stumbling block. It can never bear good fruit. Jesus rightly said, ‘Ye shall know them by their fruits’, and the Pastor used the Word spitefully and incorrectly. Judgmentalism overrides common sense, decency, and wisdom. It is not a fruit of God’s Spirit.

But the fruit of the Spirit is love, joy, peace, longsuffering, gentleness, goodness, faith, Meekness, temperance: against such there is no law. – Galatians 5:22-23, KJV

How to cope with Judgmentalism

1. Realize only God can judge you!

First, and foremost, come to grips with the reality that God is the only one capable and worthy to judge you, and when it came right down to it, He doesn’t do so superficially. If other flawed humans are judging you, they do it at their own peril and in our their own ignorance, violating Scriptures commandments not to judge.

But God commendeth his love toward us, in that, while we were yet sinners, Christ died for us. – Romans 5:8

Let us not therefore judge one another any more: but judge this rather, that no man put a stumblingblock or an occasion to fall in his brother’s way. – Romans 14:13

The cult will demand perfection for admittance, or maintain your membership, which is truly a stumbling block to faith! God simply demands you strive not to sin, knowing of course that you will again. Consider again the adulteress of John 8, an illustration I’ve used many times.

When Jesus had lifted up himself, and saw none but the woman, he said unto her, Woman, where are those thine accusers? hath no man condemned thee? She said, No man, Lord. And Jesus said unto her, Neither do I condemn thee: go, and sin no more. – John 8:10-11, KJV

We can also take comfort that while God definitely has an opinion about our outward appearance (dress) he is most concerned with the condition of the heart.

2. Surround yourself with non-judgmental people

Human nature tends to be judgmental, so we are going to face this issue throughout our life. Yet, when Coping with the Cults, your primary step towards healing is to get connected with ‘outsiders’. And this will feels unnatural at first! You’ve been taught for years, perhaps your entire life, that this is absolutely wrong, to connect with people outside of the ‘way’.

More pointedly, find both religious and non-religious people that you can speak to, maybe even family that you had before the cult that would listen to your pains and understand them. 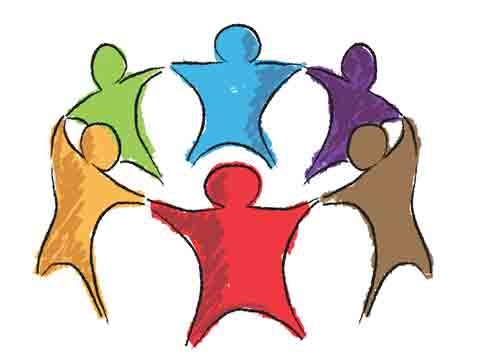 Look, when entering a cult, you cut off the entire world outside the cult. When exiting a cult, they cut you off from them. You are like an infant again in a world of strangers and now, it feels like limbo. Who do you have to turn to now? You must find them!

There are great Facebook groups like SpiritualAbuse.org and their website. These places will connect you to hundreds, thousands of people with similar stories and experiences that can listen, understand and help.

3. Do not become bitter and offer the same treatment in return

Lashing back at them is hard to avoid but is ever so important to avoid it. However, do not confuse exposing the hurt and the behavior of these groups as just being bitter. I expose them all the time, and they accuse me of being bitter.

But in my exposure of these cults, I have had many people come and say, ‘Thank you for sharing this! I was going through this and felt alone and didn’t know where to turn!’

You can be an instrument for a change! Those people who judge you are watching and waiting for your reaction. It may just be that in healing, you cause them to see you didn’t turn into the demon the cult said you would.

I have an inlaw that calls me names because now I wear facial hear, which he is not allowed to have. I could in turn label and judge him, but my impact on him would dimish and it would just be a spitting match.

My son watched my words and behavior after I left the cult and had to start admitting, dad might be right… If I had become vile and bitter, he would have believed the worst of me, and been justified to think I had ‘gone astray’.

Coping with the Cults will not be easy, whatever brand, label or type it is. The judgmentalism runs deep in the roots of these organizations. Gossiping is generally the most visible sign of their spirit, both in organizations and in people.

When my sister left our church, years ago, people talked about her all the time. My dear mother, God rest her soul would ask me at times, “Why do they have to be so mean to her?”. They were the church leaders.

The answer is because they must. To be part of the gang you act like the gang. To be accepted into a social circle, you must morph with them. To be considered one of us, you need to act like us.

If you realize this and pray for them, silently forgive them, and count it an opportunity to show them a more real truth, a more real God, and a more real faith, you can endure and spring forth fruits from the judgmentalism.

More importantly, you can slowly etch away at the scars within yourself. Someone who has been deeply ingrained in a Cult like society must battle out the judgmentalism they carry in their hearts. There are moments that you’ll look at other people and make decisions based on their appearance. Perhaps even looking back at those you escaped from and judge them.

Battle it out, pray it out, and be thankful you got out!